I’ve had root canals before, so this one wasn’t bothering me all that much. I never really understood what all the bad press was about. Yeah, it was inconvenient, expensive, took a long time (try holding your mouth open wide for an hour and see what I mean) and took more than one trip, but I never really experienced major pain or side effects or anything. I was a little cranky going in because all of the above, but still.

This time I had to go to a root canal specialist. I won’t get into the whole story (short version: the dentist before mine didn’t finish the original root canal in this tooth properly), but there was some curving going around in there, and my dentist shooed me on.

Let me back up and say that the only reason I found out that the first root canal wasn’t finished properly was because the crown that other dentist had attached (also improperly) to the tooth came off.

Let me back up a wee bit further and say I had just finished a month-long root canal on a different tooth four days before said crown came off.

So I started out not a happy camper. 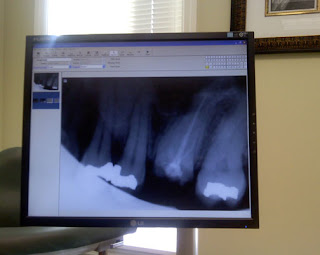 Anyway, my nubbins of a tooth looked zombie-ish to me. I even thought I could hear it’s little voice yelling, “brrrraaaaaaaaiiiiiinnnnns,” but I wasn’t certain about that. I won’t scare you with an actual photo (pretty gross in there), but I will show you the x-ray. I think you can figure out which one’s the zombie.

And all that other work? Yeah, that’s from grinding my teeth at night. But I digress…

By the way, it took a full week to recover from the first part of this root canal. First came the pain, which bypassed anything my pain prescription could handle. Then came the swelling. I already have a problem with the roots of my teeth pushing up into my sinuses on a normal day, but the swelling caused major allergy-type symptoms (obnoxious nose-running, sneezing, itching, you get the idea). Not only that, even when I wasn’t trying to eat I kept biting the inside of my cheek.

Oh, and I’m paying for this without insurance on an illustrator’s bank account.

I think this is what they mean by “root canal.”

Other than that, everything’s going just fine.