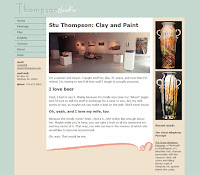 So for Christmas, the present I gave that made the biggest splash was a Web site I built for my husband. He’s a potter, a sculptor and a painter, and the site was designed to showcase his work. The gift included a domain name and perpetual updates. He’s never had a Web site before and was so impressed with the idea that I could have gotten anything I wanted for about a week.

In hindsight, I realize I should have taken more advantage.

He spent the next few days taking new photos of our studio space along with shots of some pottery he had been working on. He also spent a good bit of time looking up information including titles, sizes and exhibit information. Some of the portfolio pieces I had initially marked with dummy text like $priceless and with sizes like really”xbig” which didn’t really fly.

I included a lot of dummy text all over the site. It was meant to be funny on Christmas morning, but then replaced with information my husband was supposed to give me later. And the idea did spur multiple readings and a lot of out-loud laughing, which was the whole point of not using “Lorem ipsum” everywhere.

What I wasn’t ready for was how much he liked that silly dummy text. He liked it so much that he chose to keep the bulk of it on the site. As is. He said if people couldn’t handle his sense of humor, that wasn’t his problem. I protested at first, but eventually gave in, and we ended up keeping all the references to beer and how much his wife totally rocks.

Really, I’m just the designer. Who am I to argue?