With the overwhelming response the book project has been getting on Kickstarter, I’m thinking we can do even more. I would be able to list the book through Amazon, Barnes & Noble, etc. as well as keep the book’s domain (www.hairyeyeballs.com) and hosting up for an extra five years if we raise the funding goal a bit. But this doesn’t mean the project won’t be funded if this new goal isn’t reached! We’ve already reached it, and I thank every one of you lovely backers quite sincerely. 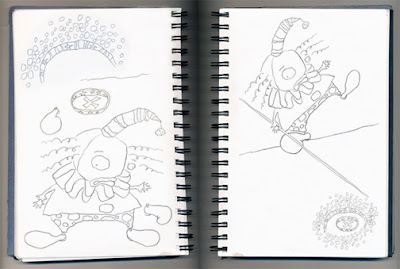 I’ve raised the new funding goal to $2,950, so if the project reaches this new goal before September 17 (or on the 17th, as long as it’s before 10 am!), everyone who pledges $25 or more will receive a limited edition physical copy of all the sketches from the book, in booklet form. Limited edition meaning, the booklets will be signed and numbered, and only available to backers of this Kickstarter project. The total number printed will be the total number of backers who pledge $25 or more. Anyone who pledges up to $25 will be able to download their copy of the booklet as a pdf.

When I sketch, I usually draw in pieces and then assemble a final composition in Photoshop. So I’m thinking the sketchbooklet will include not only the direct scans from my sketchbooks, but also the final sketches as they were reassembled in Photoshop. The image attached above is a tentative version of a two-page spread from the booklet.

The countdown is on! Only eight more days to go!