I’ve been working on new color versions of Little Rooster, mostly because I was concerned about the logistics of using analog pastel. My concerns were primarily with shipping and scanning and not being able to fix the pages before sending them out. So I’ve messed with some settings in Corel Painter, and I have two new color versions of Little Rooster to show you, both completed digitally. Digital will be better in the end anyway, I think, just for ease of changes and the power of the “undo.”

Before I started digitally I made analog color swatches of the pastels I had used in the original version, scanned the page in, and sampled the colors to create a palette. I changed the sepia colors from the original though. I wasn’t really satisfied that I couldn’t find real pastels in the color that I wanted, so when I went digital I made sure it was more in line with what I had had in mind. Sepia, not brown.

I was also worried that digital would look, well, digital, so I spent a lot of time messing with brush opacity, paper grain and paper contrast settings to get a look that was more in line with an analog feel. 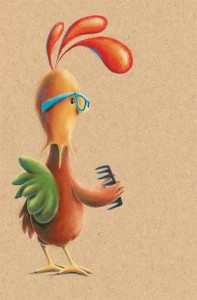 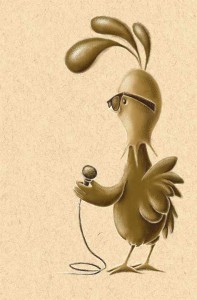