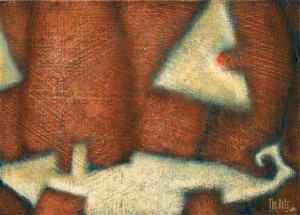 So I’ve spent the last week and a half fighting a cold. Didn’t feel like doing much of anything. I pretty much sat around and coughed up a lung.

But when I started feeling the least bit better, I really, really felt like digging into a painting. I had a couple of birch plywood boards that were already cleaned and gessoed, so I grabbed the smaller one of the two and pulled out some Halloweeny-colored paints.

I wasn’t sure when I started what I wanted to do. I had painted a quick sketch of a field of pumpkins and quickly realized I wasn’t going to get the painting finished by the end of the afternoon, so I scrapped the idea. But looking at the sketch gave me another idea.

On the upper right I had sketched a moon, and arching across near the bottom was the horizon line. I started throwing on some blueish colors thinking I could paint some kind of night scene, maybe throw in a few tombstones. But as I waited for the paint to dry, I started seeing something completely different. The moon became an eye, and the horizon line formed the top of a mouth.

So here he is: a 5″x7″ jack-o-lantern painting finished in one afternoon between nose blowings. I think if I can get a few more of these puppies in the can, they’d make nice greeting cards. It’s that “a few more in the can” thing that seems to be holding me back. I’ll have to work on that.