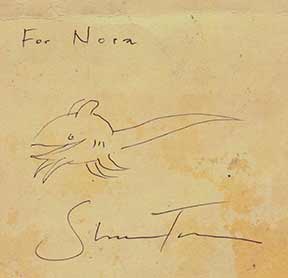 In case you’re new here, the one thing I can tell you about me is, I can’t get enough of Shaun Tan.

I had never been to a national SCBWI conference before the one that just happened in New York, and all it took for me to get there was to see Shaun Tan‘s name on the keynote speaker list. I swear I was the first one in line. 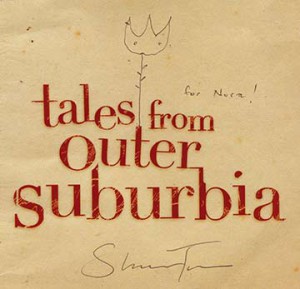 My first meeting with Shaun went pretty much like this: On Friday, the first day of the conference, I was on the elevator by myself heading up to my hotel room on the 30th floor. When the elevator stopped, the doors opened and there waiting to get on, by himself, was Shaun Tan. I sucked in a breath, but somehow nothing came out. We stepped aside for each other to enter and exit. The doors closed between us 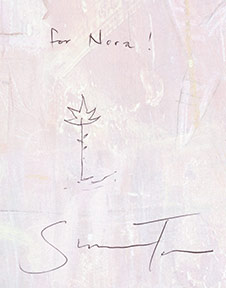 I spent Saturday morning waiting for a moment (and finding the nerve for) when he wasn’t busy talking to somebody else. When I finally caught him waiting for the elevator yet again, I introduced myself and told him he was the reason I was at the conference. The elevator opened, we stepped in and joined a couple of other people already inside. I had barely started talking again when the nice lady beside me reached out her hand to Shaun and said, “Hi. I’m Jane Yolen. We’ve actually met before.” 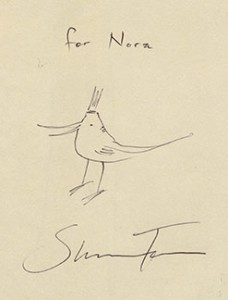 Then the other lady in the elevator said, “Shaun Tan and Jane Yolen in the same elevator together. What are the chances!”

Yes. What are the chances.

We didn’t have a chance to say any more before the elevator stopped at his floor (our floor), and he got out. 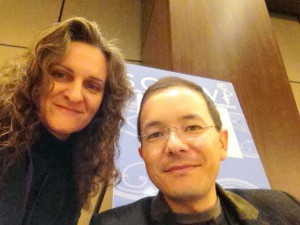 Finally, on the last day of the conference just before our train left the station (literally; we rode the train to NY), I was working the autograph party as an SCBWI Illustrator Coordinator and waited for my opportunity. Shaun signed books for three hours straight (an hour longer than he was scheduled), and after the line disappeared, I finally (finally) got my photo op.

As you can see, he signed all his books for me, even though he had been sitting there for three hours. He was kind, patient and unassuming, and if his two had been the only talks I had heard all weekend, I would have left completely satisfied. 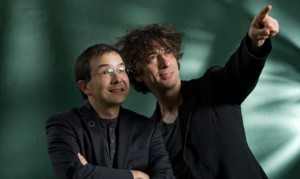 First Neil Gaiman last November, and now Shaun Tan. That’s it. Is there really anybody else?

I guess I can die happy.