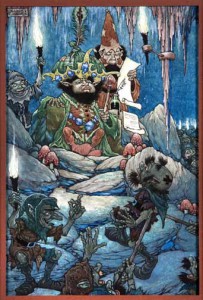 I’m excited to be part of a three-woman panel at the Frick Art & Historical Center on March 28 which will coincide with their exhibit Draw Me a Story: A Century of Children’s Book Illustration. Elizabeth Fitzgerald Howard and Elizabeth Perry will be the other two panelists. I will play the part of “The Person Who Is Not Elizabeth.”

Our panel is titled Women of the Page, and the last I heard they already had around 70 reservations in the books, which means they’re almost sold out. The event starts with a cocktail hour in the rotunda of the museum. The exhibit will be open for the cocktail hour from 7:00 through 8:00.

They’re going to start our part of the program talking about favorite female children’s book authors. Our panel will then share our experiences as authors and illustrators including our processes, how we became interested in the business, how we developed our styles and how we got our work seen, among other things they haven’t thought up to throw at us yet.

The image above is a watercolor on paper by Charles James Folkard (1878–1963) called “King of the goblins.” It’s from the book The Princess and the Goblin, published in 1949. The painting is small, only 9 ¼ x 6 ¼ inches. It’s part of the collection of the Cartoon Art Museum in San Francisco, CA. The photo of the painting was taken by E. G. Schempf.