Sometimes I wonder what people out there think they’re reading. Or seeing. When you read, how much of what you see comes from what you yourself are bringing to the reading?

The Twisted book just got reviewed by Kirkus last week (yay yay yay!), and I’m noticing a pattern here. I’m not a horror person, let’s just say that up front. At least, not in the way it’s come to be known. I don’t go for gore. I’m more of a Sixth Sense kind of scary story person. But between the book’s review in Publishers Weekly and now in Kirkus, I’m starting to wonder…

“…Her artwork tends toward the gory…”

I don’t want to sound like a writer who just got bad reviews and wants to throw a fit; that’s not the problem at all. I’m totally thankful for the reviews I got. They were positive and encouraging and much appreciated (thank you, MBR, PW and KR).

The thing was, when the Publishers Weekly review came out, I thought it was a single instance of someone who was reading more into the stories than was actually there, and I just let it pass. But with this new Kirkus review, I’m starting to wonder what’s at play here.

Without giving too much away, let me address first the PW quotes. In the first one where “the main character is brutally attacked,” I sort of make a face like, huh? Except for two lines, the main character isn’t even touched by the thing after him, let alone brutally. (By the way, the lines are: “Oily fingers grab at your throat,” and “It reaches through from the back of the open stairs and seizes your ankle.”) 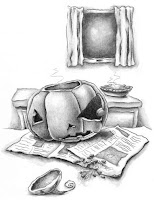 In the second quote, I think the easiest thing to do is show you the illustration. And that would be it, over to the right. If the seeds that are left after gutting a pumpkin to make a jack-o-lantern are considered mutilation, maybe parents should think twice about letting their kids at the gourds this Hallowe’en. Just sayin’.

Now to the Kirkus quote, and I think I’ll have to post another illustration here. That picture on the left? That’s as gory as it gets. He’s a butcher. You know, like the one who works in your local supermarket. I’m not even trying to be funny here. I’m a vegetarian, and the poem that goes with this illustration was actually my reaction to just how rediculous the eating of meat (including the kind that will probably be on your dinner table tonight) is to those of us who don’t partake in that sort of thing. Seriously.

Here’s a list (without giving too much away) of the rest of the illustrations in the book:

Now about “1. About myself.” I was worried at first about being categorized in a genre that I really didn’t like and thought I had nothing to do with.

But then I thought about, well, two things.

First, my mentor. Dr. Michael A. Arnzen taught me everything I know about writing fiction. He’s a good teacher, and from what I’ve heard, a good writer as well. Why don’t I know he’s a good writer? Well, because he writes horror, and I really don’t like to read horror. I’ve tried reading his stuff, but it’s not what floats my blood cells, if you know what I mean. But you know what? He’s won enough Bram Stoker Awards to shut up anybody who thinks the genre is all about teen gore movies. Just do a search for “Arnzen” on this page, and you’ll see what I mean.

As for the second thing I thought about: Alfred Hitchcock. So what if these people are seeing something that isn’t there. Alfred Hitchcock banked his career on the possibility that they would, and his is considered classic material.

So I’m not going to worry about any of this after today. If I ever get around to a Vol. 2, I’m going to stick to my guns (but I probably won’t draw any because I’m a pacifist) and draw and write the stories that make me laugh.

And, I’m going to enter the book in the Bram Stokers.